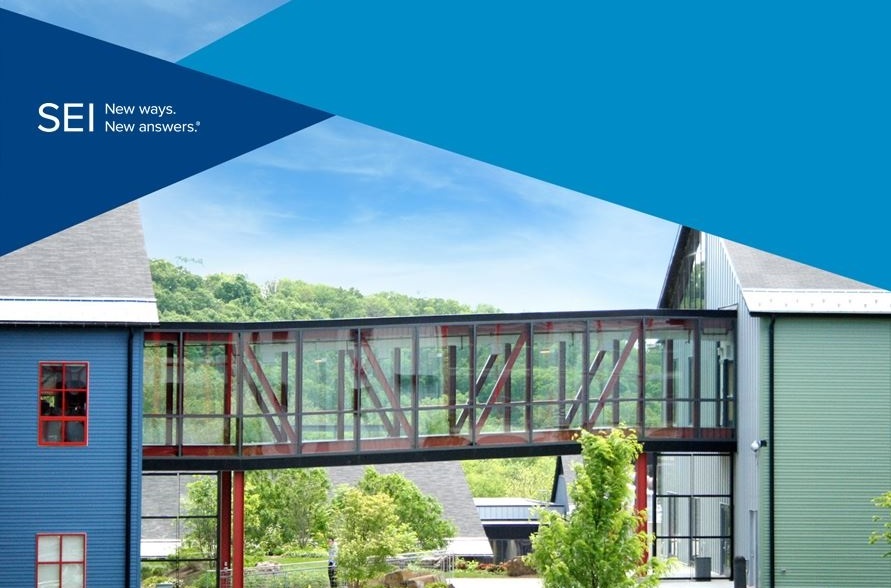 Do you remember 2008?  I remember it as the year that the Phillies finally won another World Series.  A few other key highlights for 2008 include:

For many investors 2008 is remembered for a steep decline in stock prices, with the Global Economy seemingly teetering on the brink.  The U.S. Equity Market reached bottom almost exactly one year after the collapse of Bear Stearns;  the S&P 500 Index’s value was more than halved just 51 weeks after the failed financial giant helped spark the global financial crisis.   Books such as Too Big To Fail and The Big Short captured the chaos in grim detail.  Fortunately, the decade that followed 2008 has been much more positive for investors.  Nine years from the bottom, the S&P 500 Index increased by more than 300%.

Recently SEI Investments Management Corporation published a report that revisited the Global Financial Crisis and how the economy has recovered.  FIFS Capital Advisor Group partners with SEI to deliver investment solutions for many of our clients, and we are pleased to share their report with you here:

Ten years have passed since the U.S. housing bust deteriorated into a full-blown global financial crisis. The first major domino to fall was Bear Stearns; with losses snowballing on mortgage-related investments amid a multi-year decline in realestate prices, lenders and counterparties began refusing to conduct business with the financial giant. Bear Stearns’ inability to access credit amid a liquidity crunch raised doubts about its solvency, reinforcing lender hesitations. As it teetered on the brink of bankruptcy, many worried that the demise of such a mammoth financial player would bring down the entire industry—provoking the Federal Reserve to intervene on March 16, 2008, purchasing nearly $30 billion of Bear Stearns’ assets to help facilitate an acquisition by JP Morgan Chase.

As we now know, this was not the end of the financial-market meltdown story. It turned out that our globally interconnected financial system had major weaknesses, and its dependence on a handful of major institutions—whose losses left them at risk of default—had the disastrous effect of freezing financial activity worldwide. The Federal Reserve’s involvement in facilitating Bear Stearns’ acquisition turned out to be the first of what would eventually become a series of extraordinary interventions and policy decisions over the coming years (after having already started a rate easing cycle in the summer of 2007 in response to a weakening housing market).

A Shotgun Marriage Starts the Race to the Bottom

Nine years ago, almost exactly one year into the shotgun marriage of Bear Stearns and JP Morgan Chase, the U.S. stock market reached its low point; on March 9, 2009, the S&P 500 Index was priced at less than half of what it had been 51 weeks earlier. Investors had not suffered such dramatic wealth destruction in the broad stock market in 70 years. Many questioned the wisdom of staying invested as they watched their retirement nest egg drop in value, day after day. And yet, four years from its low, the S&P 500 Index had erased the entire decline. And by the ninth anniversary of hitting bottom, it increased from that point by more than 300%. The chart below details the chain of events that caused the global financial crisis, as well as the actions that helped the U.S. stock market climb toward an eventual recovery. 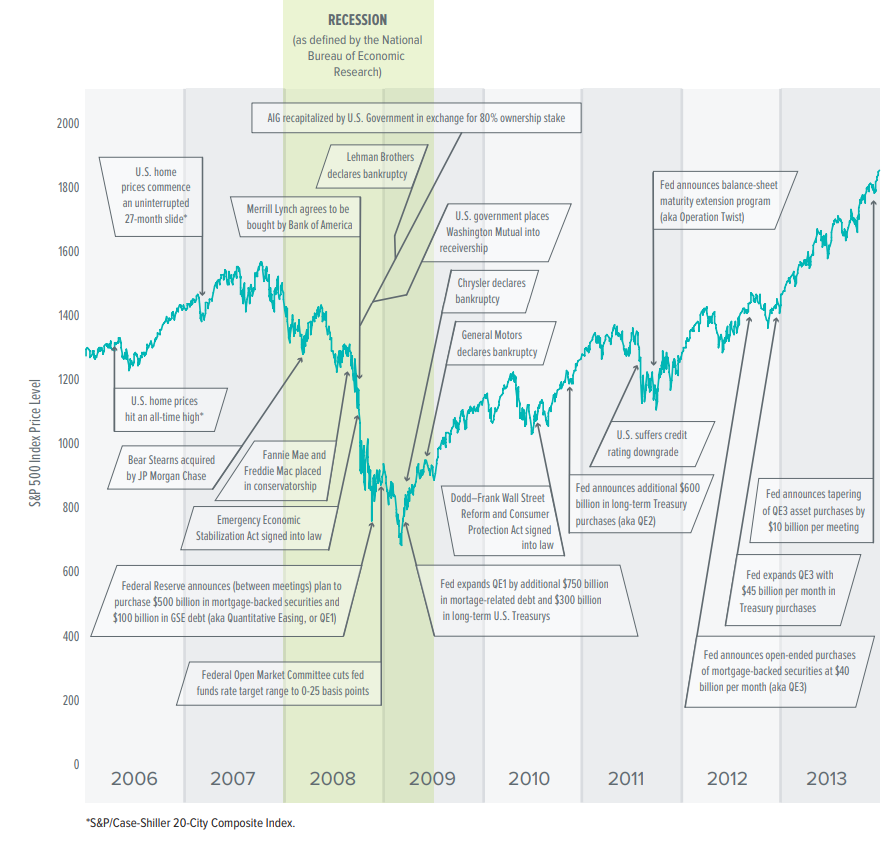 With the current bull market just months from setting a record of its own with an all-time high price on the S&P 500 Index, we cannot claim to know what the future holds—but suspect that investors are starting to think about what happens when this epic run concludes. While we can look at the past and see many events from the crisis that rightfully would have made investors uncomfortable or downright horrified, a decade of context tells us that the decision to sell and walk away amid the depths of the crisis would only have generated two questionable outcomes:

The benefit of hindsight makes clear just how important it is to have well-defined personal financial goals—and a solid longterm investment plan designed to remain on course through market peaks and valleys.

S&P 500 Index: The S&P 500 Index is a market-capitalization weighted index that consists of 500 publicly traded large U.S. companies that are considered representative of the broad U.S. stock market.

This material represents an assessment of the market environment at a specific point in time and is not intended to be a forecast of future events, or a guarantee of future results. This information should not be relied upon by the reader as research or investment advice and is intended for educational purposes only.

Index returns are for illustrative purposes only and do not represent actual fund performance. Index performance returns do not reflect any management fees, transaction costs or expenses. Indexes are unmanaged and one cannot invest directly in an index. Past performance does not guarantee future results.

There are risks involved with investing, including loss of principal.